Loops
Programming often requires repeated execution of a given sequence of operations. Loop is a basic programming design that allows multiple execution of a source code snippet. Depending on the type of the loop, the program code in it is repeated either a fixed number of times or while a condition is in effect.
A loop that never ends is called an infinite loop. The use of an infinite loop is rarely required except in cases where the break operator is used in the body of the cycle to stop its execution prematurely. Let's take a look at the Cycle constructs in the C# language.
While loop
The simplest and most used loop. Code structure and block scheme are as shown:

For the while loop, the boolean expression (condition) is first calculated and if the result is true, the sequence of operations in the body of the loop is performed. Then the input condition is checked again and, if true, the body of the cycle is again performed. All this is repeated over and over again until at some point the conditional statement returns false. At this point, the loop ends and the program continues from the next row immediately after the loop.
Do-While loop
It is similar to the While loop, except that the boolean condition is checked after the loop runs. This type of loop is called a post-test loop. A do-while loop looks like this: 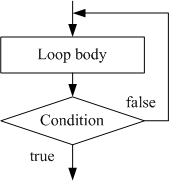 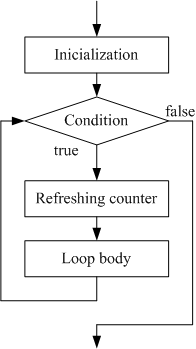 These loops are a bit more complicated than the While and Do-While loops, but they can solve more complicated tasks with less code.
Logic scheme is shown on the picture.
Since none of the listed elements of the for-loop is mandatory, all of them can skipped and an infinite loop will be created:
For loop – initialization
Initialization runs only once, just before entering the loop. Typically, the initialization block is used to declare the variable-counter (also called the leading variable) and set its default value. This variable is "visible" and can only be used within the loop. It is possible for the initialization block to declare and initialize more than one variable.
For loop – condition
The loop condition is performed once before each iteration of the loop, just as with the while loops. When the result is true, the loop body is executed, and when false it is skipped and the loop ends (passes to the rest of the program immediately after the loop).
For loop – refreshing counter
This code is executed after each iteration after the completion of the loop body. It is most often used to update the counter value.
For loop – loop body
The body of the loop contains an arbitrary block of source code. It contains the leading variables declared in the initialization block of the cycle.
Foreach loop
This loop serves to crawl all elements of an array, list, or other collection of elements.
Here's how one foreach loop looks like:
It is preferred by programmers because it saves writing code when required to craw all elements of specific collection.
Break operator
It is used to prematurely exit a loop before it completes its execution in its natural way. When break operator occurs, the loop is terminated and the execution of the program continues from the next row immediately after the body of the loop. The termination of a loop with the break operator can only occur from his body when it is executed in the iteration of the loop. When a break is executed, the code after it in the body of the loop is skipped and not executed.
Continue operator
The operator stops the current iteration of the innermost loop without escaping from it.
Array
The arrays are an integral part of most programming languages. They represent sets of variables that are called elements:

List<T> is the template version of ArrayList. When initializing a List<T> object, you specify the type of items that the list will contain; replace T-type markings with some real type of data (such as a number or string). The List class is represented in memory as an array, one of which holds its elements, and the rest is free and is kept as a backup. Thanks to the spare empty elements in the array, the addition operation almost always manages to add the new element without expanding the array. Sometimes, of course, resizing is required, but since each resizing doubles the size of the array, it happens so rarely that it can be ignored against the background of the number of additions.
Sample tasks
1) Create Windows Forms application which demonstrates all types of loops.
Solution:
Create new Windows Forms Application project and design the form as show on the picture: 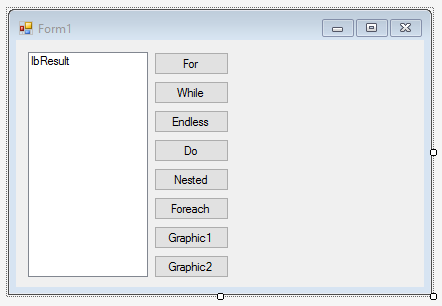 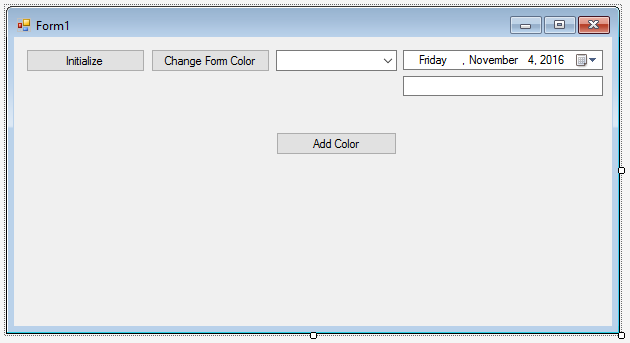 Name the controls as follows:
- Button „Initialize“ – bInitialize
- Button „Change Form Color“ – bChangeFormColor
- Button „Add Color“ – bAddColor
- ComboBox control – cbColors
- DateTimePicker control – dateTimePicker1
- TextBox control – tbDateTime
Replace the content of Form1.cs with the following:
Self-assignments
1) Create Windows Forms application that contains two arrays: arrayMounth of type string and arrayDays of type int. When a button is pressed, display the number of days for each month in format > Month: Number of Days.
2) Create an application that allows the insertion of a matrix [3x3] and a calculation of its determinant. Entered matrix elements to be stored in a three-dimensional array. Entering matrix elements to take place via DataGridView control.